Since the martyrdom of Maria Guadalupe was obvious and clear and her heroism in resisting the temptation to run away or deny her faith, proving to all her perfect union with Christ and love for his Sorrowful Mother, the family immediately set about gathering up some of the soil soaked with her blood, and the nuns, retrieving her body, nurtured the hope that her martyrdom would be officially recognised by the Church.

When they had settled in the new monastery of Nuestra Señora Al Pie de la Cruz in Mislata and after celebrating the return, thanks to the sacrifice of Maria Guadalupe, of the Servite Friars to Spain, on 24th January 1958, the Canonical Process for the Cause of Canonisation was opened in Valencia. The evidence for her martyrdom was collected and the atrocious drama of her death reconstructed, and the Congregation for the Causes of the Saints made a detailed study her Cause, as it did for many other Spanish martyrs killed between 1936 and 1939, and this took some considerable time. At length, on 28th June 1999, Pope John Paul II signed the Decree of Martyrdom and gave approval for the beatification.

On the feast of Saint Juliana Falconieri, 19th June 2000, Canonical Recognition of the mortal remains of Maria Guadalupe was carried out: these were exhumed and after they had been certified as authentic, they were cleaned and sterilised so that they could be preserved. The process took a week and was concluded with a solemn Eucharist during which the tomb of the martyr was sealed to await the ceremony of beatification.

The Cause of Maria Guadalupe is continuing until approval is granted for her canonisation. In the meantime, devotion to her is being spread and knowledge of her marvellous witness of love for Christ and his Sorrowful Mother. 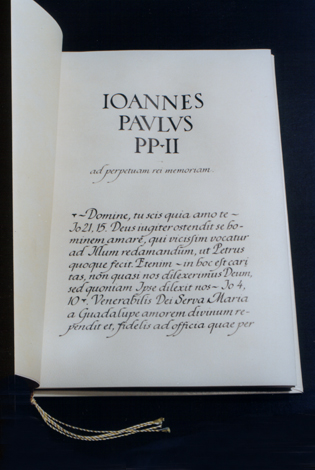