At dawn on 2nd October 1936, Maria Guadalupe was disturbed during her prayers by an unusual commotion. Her sister Filomena and brother in law José were trying to prevent someone from searching the house. Without a moment’s hesitation, Blessed Maria Guadalupe left her room with a prayer book in her hand. Upon seeing her, the militiamen asked:

“You must come with us,” they ordered her, and she, offering no resistance, followed up with:

Sustained by the grace of the Lord, she displayed great calm in all this and a firm desire to serve Him as she had always done throughout her life. There now began her own Way of the Cross and Way of the Sorrowful Virgin, at every step of which she was united with the Passion of the Redeemer and the sorrows of his Mother at the foot of the Cross. They made her climb up into a lorry, and she, tightly clutching her crucifix, tried to embolden her family saying:

Dragged before a sham tribunal, she was sentenced to death. Meek and humble, like the Lamb of God led to the slaughterhouse, she surprised her executioners by her serenity and peace and they began to hesitate in carrying out their orders until one of the militia present shouted out:

The end came two hours after her arrest in a place called Torre Espioca on the border between the towns of Picasent and Silla on the provincial road to Madrid. At about 4 o’clock in the morning, after unspeakable abuse and ill-treatment, the shots were heard that ended her life. That moment, a new name was written in the Book of Life: Maria Guadalupe. 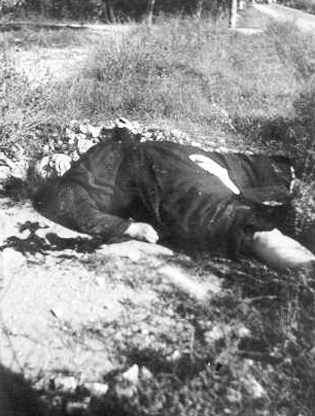 I give my life for
him who first
gave it for me.