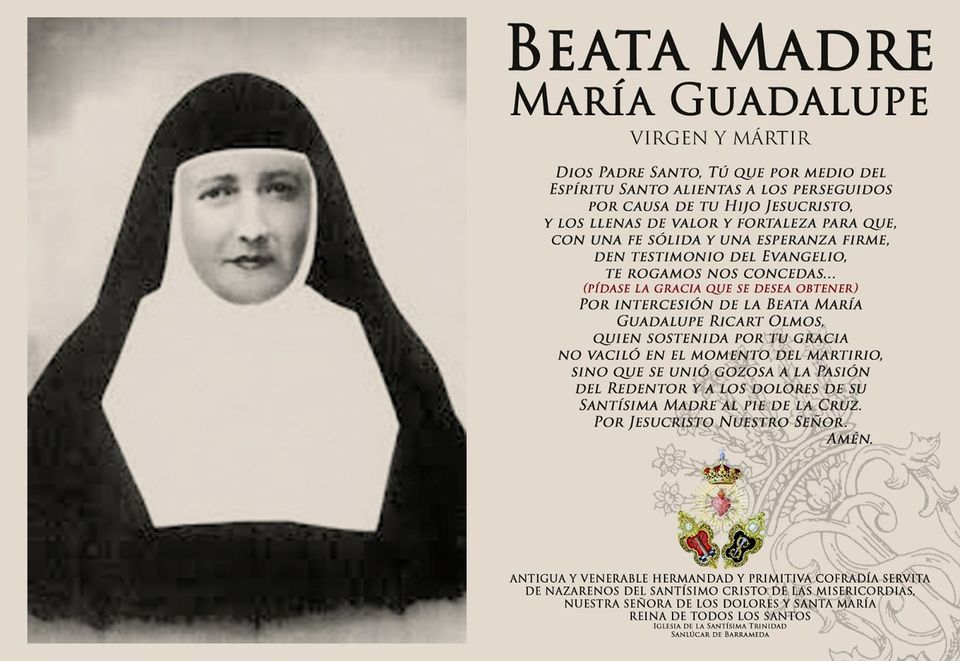 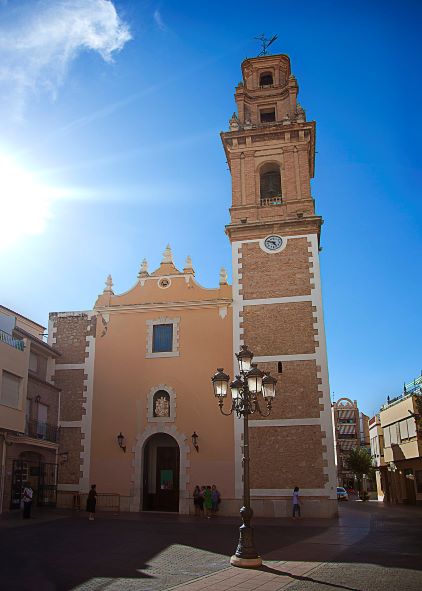 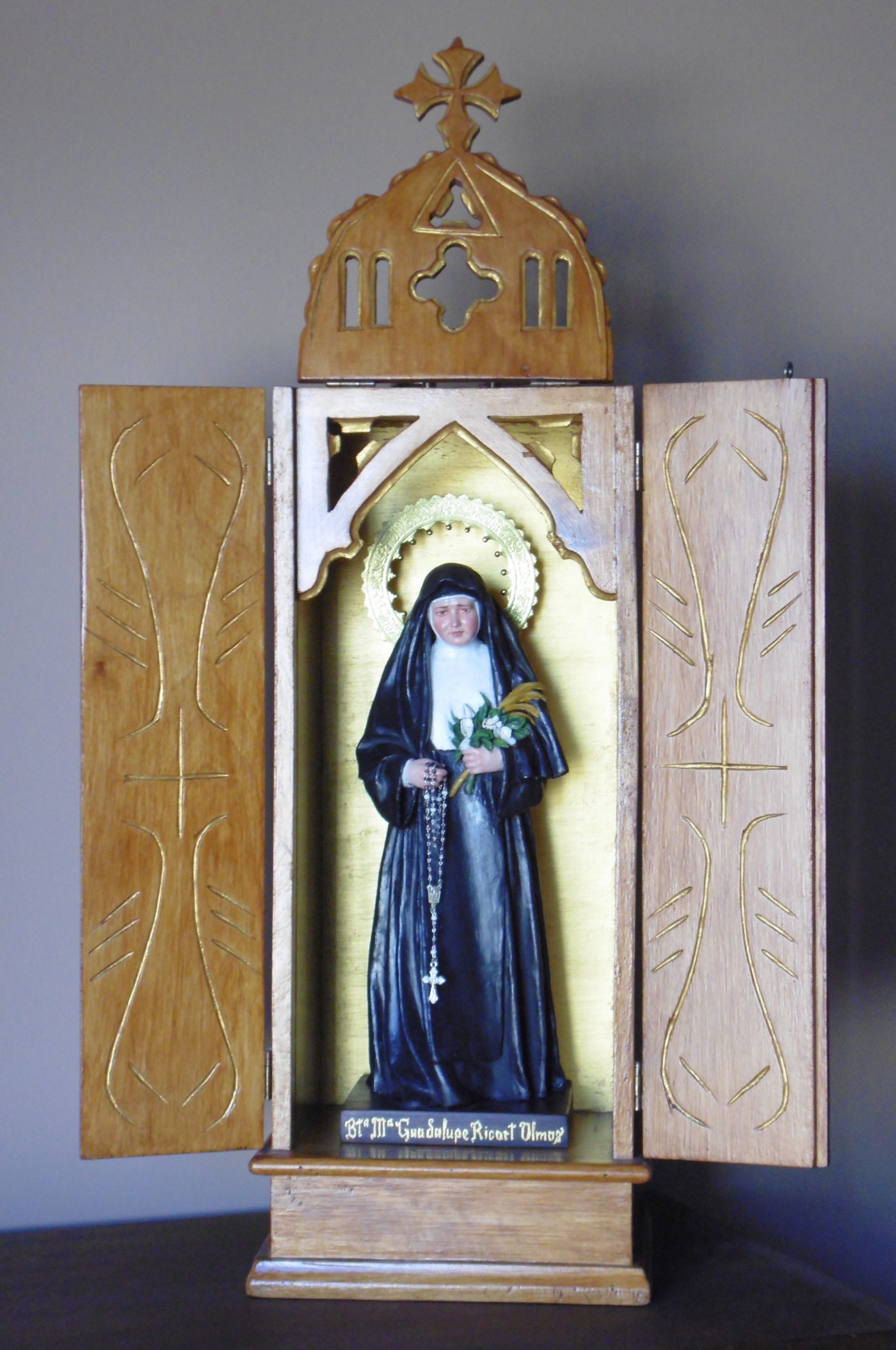 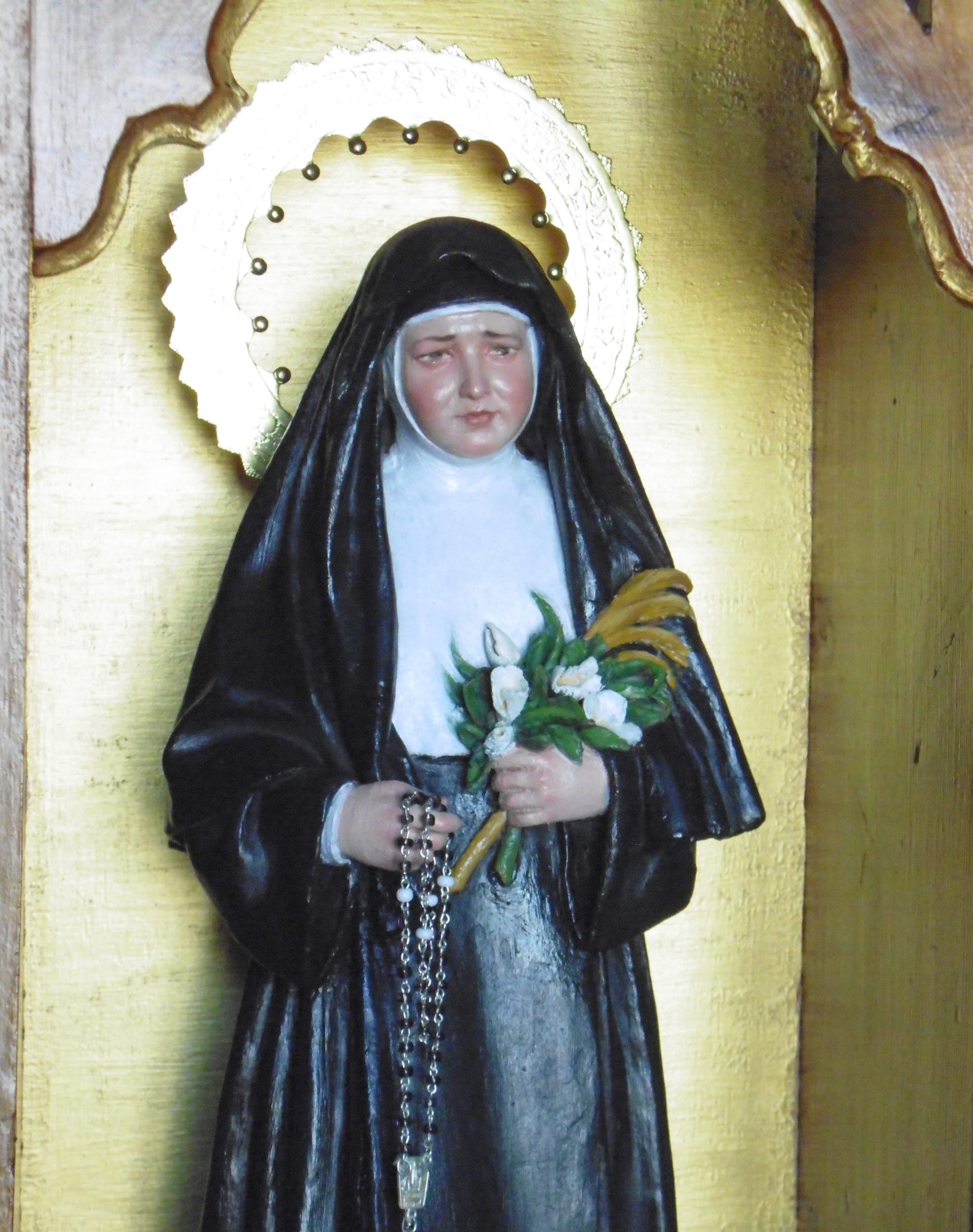 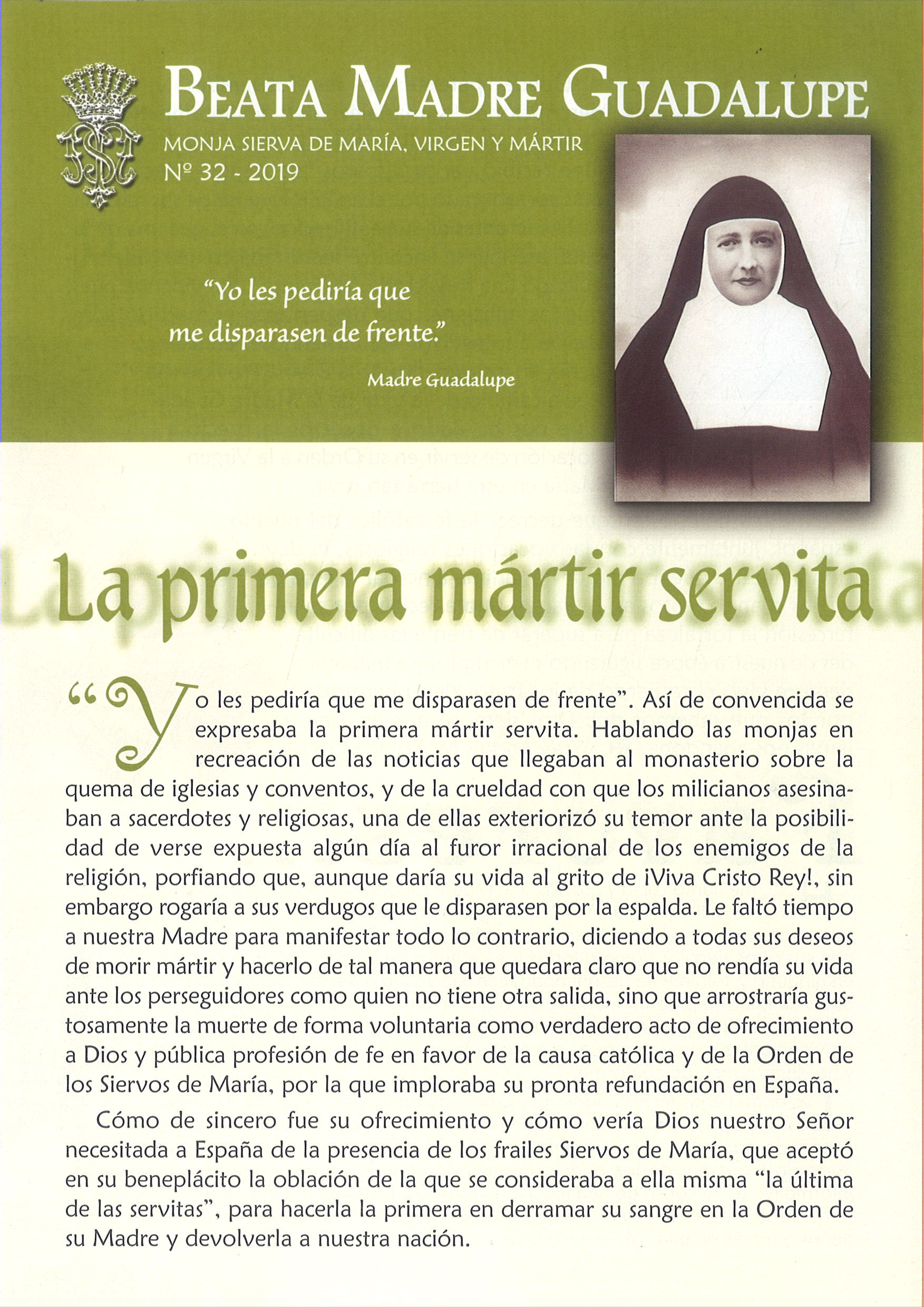 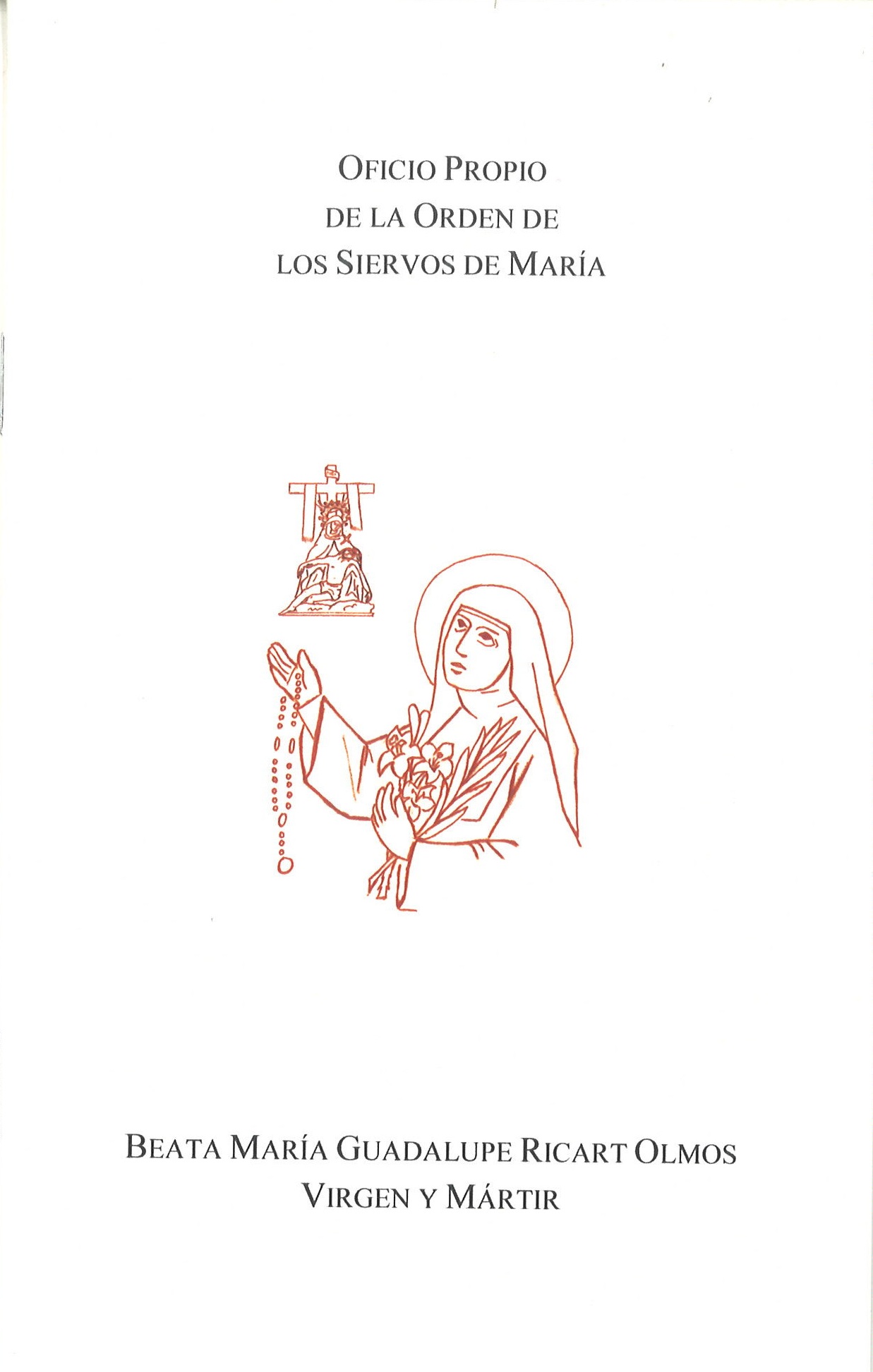 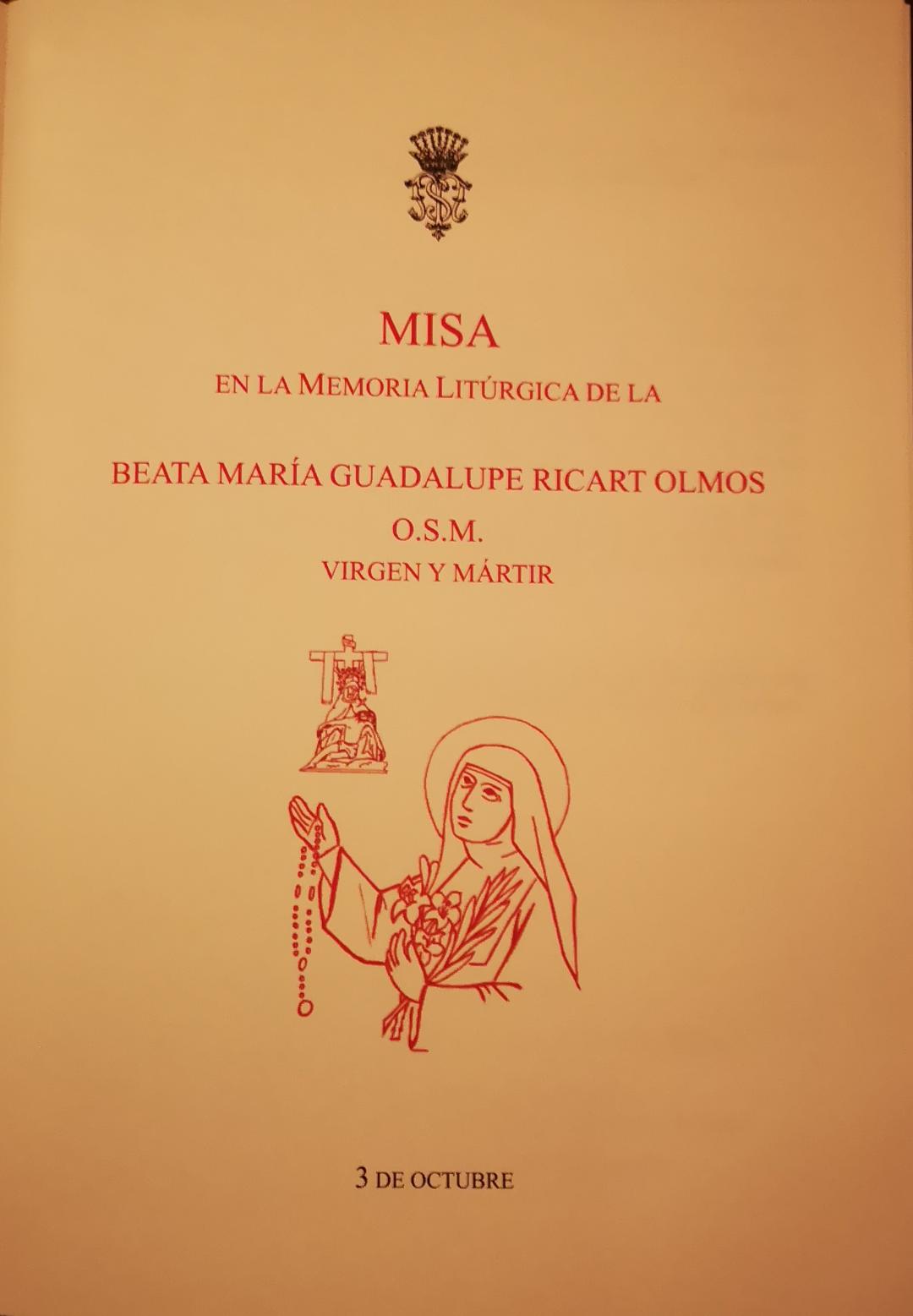 The Brotherhood of the Stmo. Cristo de las Misericordias, Ntra. Sra. De los Dolores and Santa MarÍa Reina de Todos los Santos, better known as Hermandad de los Dolores, from Sanlúcar de Barrameda, has celebrated, like many other Servite Brotherhoods throughout Spain, the feast of the Blessed Mother Guadalupe Ricart with great affection and union of her confreres on October 3, 2020, and has edited for the occasion, within the framework of the Centennial celebrations of the Canonical Coronation of her Titular Image of Our Lady of Sorrows , a stamp with prayer as a sign of great appreciation to the first martyr of the Order of the Servants of Mary and to encourage and expand her devotion among her fellow citizens.

We can say with satisfaction that the feast of the Beta Mother Guadalupe Ricart that was celebrated this year 2020 in Albal (Valencia), her hometown, on Saturday, September 26, was a true event due to the solemn blessing of a domiciliary Chapel during the Holy Mass at eight in the afternoon. Both the feast, whose date was set as is customary in the Parish closest to that of the Valencian martyrs (September 22), and the preparatory Triduum, were very popular events, possibly more than the previous year. The Parish Priest, D. Engracio Ballester, knew how to raise the fervor of his parishioners with his emotional preaching, highlighting the virtues and merits of this great martyr of the Church in Valencia and of the Order of the Servants of Mary.
From the first day the altar was adorned with beautiful flowers and next to the painting of Blessed Mother Guadalupe was placed her holy relic, which was given to be kissed after the respective celebrations. In addition, on a credence, a very beautiful portable wooden Chapel with golden hues was also exhibited, in the gothic style, with a small polychrome terracotta image, precious and very devout, of the Blessed Mother Guadalupe, made expressly by commission from the sculptor Antonio Martínez, and carrying at his feet a relic of the martyr. The Little Chapel was the wonder of the people and the act of blessing moved everyone present very much.
Even despite the small size of the sculpture, the renowned image maker has been able to reproduce very well the countenance of Blessed Mother Guadalupe and reflect in it both her suffering and the trustful and prayerful abandonment in the will of God that defined her. The delicate figurine includes the attributes of martyrdom and virginity, that is, the palm and the lilies, placed on the left arm and clasped against the heart. On the other hand, in his right hand he wears the Crown of the Seven Sorrows of the Virgin Mary, thus signifying the central devotion and love of Blessed Mother Guadalupe to the Sorrowful Holy Mary the Foot of the Cross, the main axis of the Servite charism.
With the blessing of the transportable Chapel, it is hoped that by visiting the houses, the sick, the elderly and the whole family in general, they can feel closer to the beneficial intercession of this glorious martyr on behalf of their problems and attract all the blessings of heaven, who need and implore the Holy Trinity and the Most Pure Mother of God through them.

For imperative reasons and internal to the Spanish Delegation of the Servants of Mary, the Vice-postulation of the Cause of Canonization of Blessed María Guadalupe Ricart Olmos regrets not being able to edit and send the Information Sheets, as it did until now with the help of benefactors, for an indefinite time.

However, any news about the Cause and the favors received through the intercession of our beloved and admired Blessed Mother Guadalupe will continue to be included, with the help of God, on this website.

It is therefore the wish of the Vice-Postulation that the devotees and faithful in general can continue to have access to the evolution of the Canonization Process and all its news through this humble but effective medium, which it will try to keep updated. Therefore, do not stop being informed by connecting with us and of course continue sending us the list of the graces obtained, no matter how small they may seem, as well as, if you can, contribute with your donations to this beautiful Cause for the glory of God and good of souls.

GREAT NEW!
THE INFORMATION SHEET ON THE WEB

This is beautiful news for all the devotees of Mother Guadalupe, especially for those who have recently discovered the great figure of this famous martyr of Christ, since from now on you can enjoy the INFORMATIVE LEAVES of the previous and even old numbers and check how the process of his Cause has evolved through the publication of such a humble instrument. You will find all the numbers kept in our file in the DOCUMENTS section. Too bad they weren’t all preserved. However, the first SHEET edited by the Nuns of Al Pie de la Cruz, aided by the holy Vice-Postulator of the Cause, the Revdo, has reached us. Félix Mª Maletto OSM. I am sure that when you consult them, you will be filled with greater devotion and with great desires to support with prayers and alms the Blessed Mother Guadalupe’s Cause in the hope of seeing her deserved canonization soon.

THE LITURGY OF THE HOURS IS AVAILABLE IN OUR WEBSITE

To please all those who asked us for the Service of Beata Maria de Guadalupe from the 3rd of October and in preparation for Her Liturgical Feast, the texts of the Liturgy of the Hours in the section LITURGICAL FEAST, for the faithful communities and lay people devotees of our beloved Mother of Guadalupe, who pray the Divine Office, can follow our public prayer at the Church as due worship to this blessed martyr of our Order.

NEW EDITION OF THE HOLY MASS

In the year 2001, immediately after their beatification, the Vicepostulation sent all their Servites on Spain and Latin America the Mass of the Beata Maria de Guadalupe in photocopies and from 2006 it was also available in PDF format in their website. We are aware thatsome Communities have celebrated the mass with lots of fondness, while in others the mass copies were misplaced or were not aware of their availability on the web.

Divine Providence has sought that a very devout lady, recently widowed, fund a new edition of the Holy Mass so that all devout Servites and priests can duly celebrate it, as per the liturgical calendar of Our Order, at least, every 3rd of October.

This edition is more suitable than the last and makes the celebration more comfortable. Apart from its proper prayers, there has been incorporated amonition, a penitential act and supplications. These three new elements can be adapted according to the celebration. To help the celebrants, it is included Prefaces of The Holy Martyrs, of The Virgins and the Preface proper of the Saints and Beatified of the Servite Order of Mary, followed at the end the Solemn Blessing. For the reassurance of everybody, this edition of the Holy Mass has the corresponding authorization of our Provincial Father according to Canon Law. (Can. 832)
I’m sure that everyone will enjoy this new publication, as it will help us to bring glory to god while we ask for his blessing by means via the first Martyr of Our Order.
The publication can be downloaded on the section LITURGICAL FEAST or ask for a copy in the Vicepostulation.

The Vicepostulation haskicked off again the edition publishing of the Newsletter of the Canonitzation Cause of the Beata Madre Mª Guadalupe Ricart Olmos, stopped for while due, among other reasons, to a lack of donations. Thanks to some generous contributions the beloved and necessary newsletter has resumed and through it many have known the admirable figure of our Mother of Guadalupe and her awe striking testament of faith during the persecution of the Church in Spain during the 1930s. Thankful for the contributions that have made this possible, we ask as well

This website dedicated to the Beata Madre Guadalupe was created in the year 2006 with occasion of the 125th anniversary of her birth with the generous donation of a devout, but with the technological advances, the web has slowly become obsolete.
Thanks to the contributions of the friars from the Servite Order on Spain, the website has optimized it function on Internet. Now it’s also accessible through mobile devices and can be shared on social networks with your friends to help us broadcast her edifying life and holy death.
Additionally, you also can send us, through a form on the website, any favours received and say thanks for them.
Likewise, the website is available in the 4 languages more spoken by the Servite Order.