The relics of the saints and martyrs have been venerated in the Church since very early times since the martyrs, united with Christ in death, will be the first to rise at the resurrection on the last day. Their relics remind us of the triumph of good, love, forgiveness and humility and show us that the saints are real flesh and blood people and that, in spite of limitations, it is possible to live the Gospel to the full.

According to the testimony of the official medical expert, Dr. Delfino Martí Fosar, the body of Blessed Maria Guadalupe bore signs of atrocious torture. “It was still laid out flat, bare from the waist down with the legs apart and showed a wound from a rifle shot in the area of the genitals.” The gravedigger, Señor Vicente Peris Vila, described other details of the terrible ordeal she underwent for the love of Christ: “When we moved her and lifted the body, much blood gushed from the wound in her chest and shoulder (…) Little blood came from the wounds made by the shot through the temples; it is possible that this was the finishing shot.” This testimony was confirmed by the analysis made of the bones of the Blessed, which showed bullet wounds in the cranium and the hip. A bullet was extracted from one of these and was placed in her tomb with her holy remains.

Before they were forced to flee from the monastery for the last time in 1936, Blessed Maria Guadalupe took part in a conversation about the disturbing news of priests and sisters being killed.

One of the sisters said: “I’ll ask them to shoot me in the back!” Maria Guadalupe replied, with fervent enthusiasm:

And indeed she offered her life as a victim of love without turning her back on Christ.

Her mortal remains repose in Al Pie de Cruz monastery in Mislata, in a tomb blessed by the then Prior General of the Servite Order, Fra Hubert M. Moons, during the celebrations for the beatification. Part of the dress and undergarment she was wearing at the time of her martyrdom are also kept there, along with her rosary, one of her prayer books and other personal items.

A reliquary containing the bone from one of her fingers was offered to the Holy Father among the relics of other martyrs beatified with her.

For the 125th Anniversary of her Birth, holy cards were produced containing “contact” relics, that is, tiny pieces of the cloths that were used to cover her bones during the Recognition. 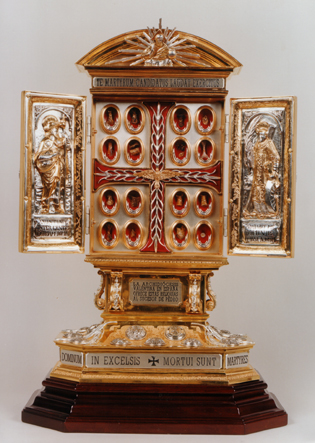